Tom Thomas is the Mountain Rescue Centre owner who hails from Australia. He is mainly seen flying Wallaby 1, his Search and Rescue helicopter (Wallaby 2 from Alien Alert onwards) or driving his yellow 4x4.

Tom was introduced in Series 5; and also appears in Series 6 onwards, including the feature-length specials.

In Series 5, Tom is mainly seen during some rescue missions. However, in Let it Snow he uses Wallaby 1 to go to Newtown to get supplies for Dilys' shop.

In Series 6, Tom helps the fire brigade with emergencies more often, mostly having a few non-speaking roles, like in the episodes Poorly Penny, Three Legged Race and Danger by the Double. In this series, he is shown to be a good abseiler, as demonstrated in the episodes Fireworks for Mandy and Pontypandy Extreme.

Tom has blonde hair, blue eyes and wears an orange rescue outfit with beige boots. He wears sunglasses some of the time. In Series 6, Tom is slightly taller than Elvis, and his hair is thicker. His sunglasses have changed design too, having black visors that completely go over his eyes, as identified in the picture above. He mostly wears them when he's in his helicopter, but the Series 6 episode Cat Magic was where he wore them whilst driving his 4x4.

Tom cleaning his Mountain Rescue 4x4 in Firefighter of Tomorrow

A Promo of Tom Thomas with his helicopter in Series 5

Tom on a look out

Tom responding to an emergency call

Tom and Moose stuck in a tree

Tom and Moose in the "Catfish"

Tom in Float Your Boat 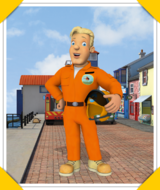 Tom in series 12
Community content is available under CC-BY-SA unless otherwise noted.
Advertisement