Fireman Sam Wiki
Register
Don't have an account?
Sign In
Advertisement
in: The Prices, Characters, Original Series characters,
and 5 more

Norman Stanley Price[4][5] is a boy who loves to play practical jokes and skateboarding. Norman usually fails to set appropriate limits on his own behaviour, and has been known to cause mischief and sometimes causes havoc at the fire station and for many of Pontypandy's residents. But there have been rare moments when he is the one not in trouble and even helped to save the day. As of the thirteenth series, Norman is more well-behaved and less troublesome.

He has shown interest in becoming a firefighter himself one day, but he also has said he was going to be a shepherd when he grows up as stated in Sheepdog Trials. He loved strawberries (as stated when vanilla ice-cream was dropped on his head in What Goes Up), but went off them in The Wishing Well after eating too many and feeling sick afterwards. He holds the Gwyneth Book of Records for being rescued fifty-seven times as of Record Breakers.

Norman is a troublemaker who causes trouble around Pontypandy. He often causes emergencies and puts himself in danger. He is far more mischievous and troublesome as of the sixth series, as he causes emergencies way more often than he does in the first series to the fifth series. However, starting in the thirteenth series, Norman's personality and traits have been toned down to the fact where he is well-behaved and only causes emergencies on occasions. Norman has also shown to be interested in science, as seen in Chemistry Set.

Norman in his first appearance in The Kite 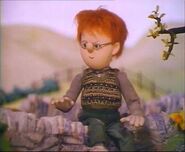 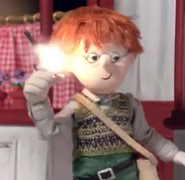 Norman with Sam in the Original Series 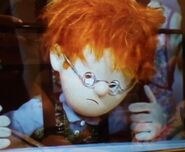 Norman with his head stuck in Norman's Tricky Day

Norman stuck in the window in Trevor's Training

Norman hiding in a dustbin

Norman riding a red skateboard while outside with Dilys in the 1988 annual (Note: The red skateboard Norman is riding belonged to Acorn in Rocky Hollow)

Norman wearing his Caving Helmet in Twist of Fate

Norman disguised as an Alien in Bug Eyed Boy From Venus

Norman with Woolly and Mandy Flood in Twitchers in Trouble

Norman in his Vampire Costume in Mummy's Little Pumpkin

Norman photobombing Penny in Fit for Nothing

Norman and Woolly in the Animal-Net in Beast of Pontypandy

Norman with Bella in Birthday Surprise

Norman dressed as a Fire-Fighter in Firefighter of Tomorrow

Norman wearing his Bunny Sweater in The Big Freeze

Norman covered in snow in Let it Snow

An early design of Norman in the CGI pilot

An early design of Norman and Sam in the CGI pilot

Norman in his winter clothing 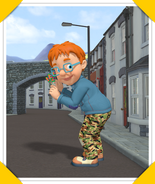 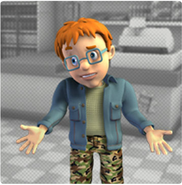 Norman on a zip wire

Norman-Man's pants have fallen down!

"Will you be quiet about my underpants!"

Norman in Norman Burns Up the Dancefloor (Season 13)