Heroes of the Storm

Heroes of the Storm (marketed in the US as Ultimate Heroes) is a feature-length special. It was released on DVD On June 3rd 2015 in Australia and on the 21st of September 2015 for UK audiences. It was made available online for US viewers via Amazon on November 4th 2014. It takes place after Series 9 and before Series 10.

One snowy day in Pontypandy, Trevor Evans and the Pontypandy Pioneers are on a bus trip. Norman asks if they’re there yet, but Trevor says, “No Norman, not yet,” This keeps repeating until suddenly, Lambykins is spotted in the middle of road. Trevor tries to steer around, but then suddenly, the bus spins off the road and into the snow until the bus stops, however the bus is hanging off a cliff by 2 wheels. Trevor then has to call Fireman Sam. Meanwhile at the fire station, Sam, Penny and Elvis are collecting buckets and pans because the roof is leaking. Sam hopes they’ll have enough pans to last until the new fire station is built. Mike Flood says that the pipes are just too old and rusty to fix. Chief Fire Officer Boyce also says that the roof needs replacing, and the floors are crooked. He announces that due to health & safety breaches, they will have to shut down the old fire station immediately, much to the shock of the crew. In the meantime, the team will have to coordinate rescues from a Mobile Command Unit whilst the new fire station is being built. Sam says "It’ll be a shame to leave the old place though,” Elvis wonders if they're going to have any more rescues on their last day. Suddenly, the Teleprinter starts beeping and they’re sent to Trevor and the Pontypandy Pioneers in the stranded bus at the cliffs. They use Venus' winch to try and pull the bus back up the cliff, but the bus is too heavy, so Sam opens the bus door and instructs everyone to come towards the door very carefully, which everyone manages, except Dilys who is too scared to move, so Sam risks his life and goes inside the bus and gets Dilys out safely. However, Venus starts getting pulled towards the cliff. Sam tells Elvis to get the wire cutters as he hangs onto the winch. Elvis, just in time hands the wire cutters to Sam and cuts the wire. But sadly, Trevor's Bus didn't make it, as it was destroyed when it fell down the cliff. Sam then comes out with the quote "Just another day in Pontypandy".

Several months later, the construction of the new fire station is almost complete. Meanwhile at the Mountain Activity Centre, Moose and Tom are using Moose's new amphibious vehicle to take wildlife photographs, but they haven't quite mastered the controls yet. At the Mobile Command Unit, they're trying to fix their radio signals. Elvis accidentally rips the map of Pontypandy whilst writing a song for the grand opening. Moose and Tom are now stuck in the sea and have to call Fireman Sam. They drive to the Ocean Rescue Centre and have to use all 3 boats to find them; Juno, Neptune and Titan since nobody else could fly Tom's helicopter. They finally find them and bring them back to shore. Then we see small clips of emergencies such as a bin fire at the train station and the new fire station being built. Finally, once Station Officer Steele and Chief Fire Officer Boyce have finished checking the requirements, it’s now about time for the grand opening.

We see an aerial shot of the fire station and notice that as well as a new fire station, the crew have been issued with new jackets (with no explanation given). Elvis then sings his new song "Pontypandy Rock" to the crowd. Chief Fire Officer Boyce then declares the new fire station, open. Then, he gives the guided tour of the station as well as introducing two new firefighters, Arnold McKinley and Ellie Phillips. All is well in the fire station now apart from Elvis messing up in the first training session. Station Officer Steele tries to gather how the new control system and the Map-screen 700 works, but he ends up getting confused with the controls. Sam then comes in and deactivates the voice mechanism. He instructs Station Officer Steele to read the instruction manual first before actually using it. The next day, Penny takes Norman, Mandy, Sarah and James on a pot-holing trip in the old mines on her day off. However, something unexpectedly dangerous is coming to Pontypandy on that same day...

Elsewhere at sea, Charlie and coastguard Ben see a hurricane has rapidly developed and is heading straight for Pontypandy: they immediately warn Sam. So it’s action stations as Sam has to rescue Penny and the kids from the old mines while Elvis helps prepare Pontypandy for the storm and is left in charge. The firefighters collect everyone and takes them to the new fire station. However, as Joe was trying to close his garage door due to the strong wind, a fire starts at his garage caused by a lantern. Elvis tells Arnold and Ellie that they’ll need sticky foam to put this fire out. Meanwhile at the mines, Sam gets everyone out and to shelter at the Mountain Activity Centre to drop off the kids with Moose and Tom inside before he and Penny take Moose's vehicle (named the Natter Jack Toad at this part) to head back to Pontypandy.

Station Officer Steele asks Elvis how the emergency was going and tells him they're on their way back. Station Officer Steele hopes nothing else happens. Suddenly, lightning strikes some left over building supplies and sets them alight. Station Officer Steele informs Elvis the situation and tells him to hurry back to the station otherwise the fire will reach the gas canisters and they'll explode, causing the new fire station to will be destroyed. As they're racing down the flooded streets, a tree falls and blocks Jupiter's path. But Elvis spots that Venus can get through so he and Arnold drive back to the station (at this point the cabin is fully alight) and start flooding towards the canisters, but they’ll need more water. Station Officer Steele tells Ellie to get everyone a safe distance away and luckily Sam and Penny arrive just in time. But without Jupiter, they can't get any water. However, Sam thinks that the training hoses can reach from the extra main outlets. So, he fetches two rolls of hoses and he and Elvis fight the fire while Penny cools the canisters. Soon, the fire is completely out, as Pontypandy survives the hurricane at last.

The hurricane passes and life is back to normal in Pontypandy. Trevor gets a new bus (which is still the same but has a different interior). Moose then donates his amphibious vehicle to the team. Arnold then names it Hydrus. Sam then parks Hydrus in the new fire station and the credits roll.

Mercury and Venus track through the snow

Sam & Mike on the building site of the new fire station

Moose & Tom in trouble on board "The Catfish"

The new station under construction

Jupiter heads off in an emergency

Penny at the new lockers in the new fire station

Penny & the kids at the train station

Sam getting everyone to prepare for the Hurricane

Sam, Elvis and the recruits

Jupiter and Venus turning out from the new station

Ellie asking Elvis what to do?

Helen asking Elvis if she can help out in anyway

Sam outside the mines

Venus drives through the flooded streets

Penny and the kids swim through the flooded cave

Arnold gets Lily to safety

Penny and her tug-of-war team save Sam

Ellie takes Hannah out of her wheelchair

A pylon blown down on the railway line, narrowly missing the Pontypandy Flyer

Elvis slides down the firepole

Sam, Penny & the kids in the mountain activity centre

Penny & Sam wondering how there going get back to Pontypandy

Sam and Penny climbing onboard The Catfish

Jupiter races through the flooded streets

Elvis & Arnold head for the Fire Station in Venus

Sam gets the hoses

Trevor at the wheel of his new bus

An aerial view of the new fire station 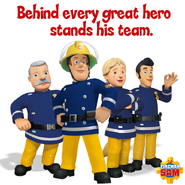 Everyone apart from Sam wearing the upgraded coat and belt

A flyer advertising an event