Fireman Sam Wiki
Register
Don't have an account?
Sign In
Advertisement
in: Characters, The Floods, Parents,
and 4 more

Nurse Helen Flood (nee Williams) is Pontypandy's resident nurse and Mountain Rescue medic. She is married to Mike and is the mother of Mandy.

She drives a small ambulance to check on her patients and occasionally comes to the fire station to train the firefighters in first aid and equipment.

She also has a 4X4 Mountain Rescue Ambulance.

She and her family live in a house on the outskirts of Pontypandy.

As of Alien Alert she is now part of the Pontypandy Fire Service as a volunteer Search and Rescue Medic for when people are injured in the mountains and requires Wallaby 2.

She has a brother named Malcolm Williams, who is a police officer. 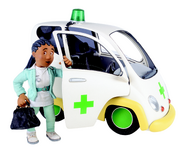 Nurse Flood and her car in Series 5

Helen in the rain

Helen and her family being served by the twins

Helen rescues Sarah from the ravine 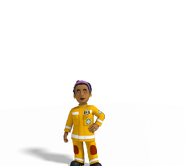 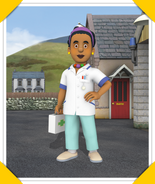 Helen & Mike having a look round the new Police Station
Community content is available under CC-BY-SA unless otherwise noted.
Advertisement