Ellie Phillips is one of the Pontypandy firefighters. She was introduced in the feature-length special Heroes of the Storm.

After completing her training at the Newtown Fire Academy she joined the Pontypandy Fire Service with fellow graduate Arnold McKinley.

Ellie is athletic & competitive & sees the world through the lens of physical challenges (for example: if Sam asks her to shift a pile of hoses she'd be the one trying to do it the fastest), Ellie is full of energy but has the tendency to rush into things and take on too much. Penny can recognise traits in Ellie that she had when she was a young firefighter.

Firefighter Ellie Phillips in Heroes of the Storm

Ellie takes Hannah out of her wheelchair

Ellie and Elvis in Jupiter

Ellie and Arnold in Jupiter

Ellie operating the BA Board

Ellie and Penny with BA

Ellie and the others watching TV

Ellie using the Angle Grinder in Set For Action!

Ellie with the rest of the team 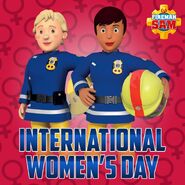 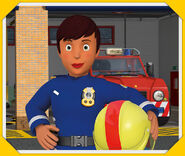 Ellie is ready to save the day!