Chief Fire Officer Horatio Boyce is the Chief Officer for the Pontypandy Fire Service. His main office is situated at Newtown Fire Station where he is based, but occasionally he visits Pontypandy Fire Station to give the firefighters training, hand out awards and make sure they are all doing their jobs properly.

He and Station Officer Steele both trained together at the same Fire Academy, after which they both together started work at the Pontypandy Fire Service.

Boyce later got transferred to Newtown Fire Station, where he climbed up the ladder and eventually became Chief Fire Officer.

He visited Pontypandy after a very long time during The Great Fire of Pontypandy, when he came to present Sam with the Medal of Outstanding Bravery. During his visit he also offered Sam a promotion as Station Officer of the New Rapid Response Fire Unit in Newtown, which was eventually declined by Sam.

He stood in for Station Officer Steele, as a relief when he injured his back.

He has also often been sent by HQ to conduct drills and assessments for the Pontypandy Fire Station. He tested Elvis' driving for his Advanced Driving Certificate, and he also tests the team's abilities in multiple rescue scenarios and demonstrates how to perform certain rescues.

In Set For Action!, under controversial circumstances, he had no choice but to dismiss Sam from the brigade for failing a simple safety check, but he reinstated him after evidence was given by Sam's nephew James that the safety check was foiled by Flex Dexter.

He is very authoritative and strict. He and Steele are good old friends but the two still have a gentle rivalry between themselves.

Boyce would love to lure Fireman Sam to Newtown - but in his heart of hearts he knows that Sam would never leave Pontypandy. 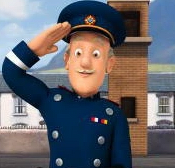 Boyce and Steele in the control room