Bella Lasagne is a café owner who is originally from Italy. She is the owner of Rosa the cat. She almost always has lunch prepared for Sam.

Bella's normal attire is consisted of glasses, a short pink dress, a apron and red heels.

Bella has minor roles in most episodes, mainly gossiping with Dilys, but in some episodes she is a major character.

In "Lost Cat", a chip pan caught fire in the café and she had to be guided out to safety.

In "Lost Ring", she inherits a diamond ring, but it disappears.

Also, in "Quarry Rescue" she starts making pizzas for Trevor to deliver.

In "Home From Rome", she goes shopping at Bingles Department Store and Rosa stows away in her bag. When Rosa causes mischief, they end up getting trapped in the broken lift after the store closes. The fire brigade soon came to their rescue.

Bella's character in series 5 is the same as in the original series.

In "Pizza Palaver", she gets a new pizza oven, but it ends up catching fire when an old bird's nest falls down the chimney. In this series, she still owns Rosa, as well as a goldfish called Pavarotti, as seen in "Joker Soaker".

In the CGI series, Bella was absent throughout Series 6 - 9, but her café can still be seen across the road from Dilys' shop through out the series.

Bella is a nice person, but dim-witted for some reasons and she can also get cross as well.

Bella soon moved to Newtown. It is assumed that she moved during the period between Series 5 and 6.

After a very long absence, Bella made her return in Pizza Pandemonium to help with food for Gareth's railway gala.

As seen in Fiery Football, she is surprisingly good at scoring goals. 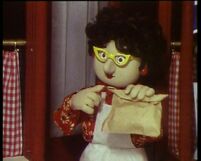 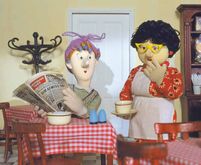 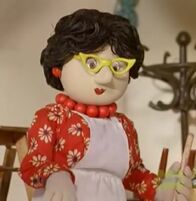 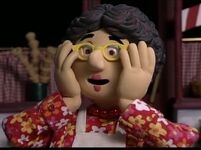 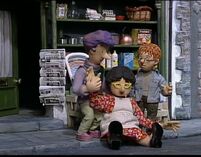 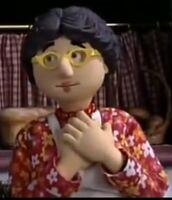 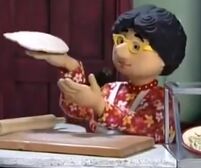 Bella with her pizza oven

Bella pizza oven is on fire. 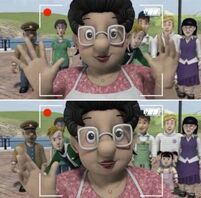